One of, if not the most acclaimed alternative band from Jordan currently, Autostrad was born in 2007 out of a long-lasting friendship. Since then, the Amman-based group have recorded three albums and are currently working on a new full-length.

Recently they released a new single, “Habeetak Bel Turki”. We asked them about the song, their upcoming fourth album, as well as about the music scene in Jordan.

“‘Habeetak Bel Turki means’ literally ‘I love you in Turkish’. The idea of the song started quite a long time ago and didn’t take its current form until recently. It’s one of those projects that you keep in the archive but are always on your mind and just waiting for the right moment to put it out there.”

“The story behind the song started during the first years when the Turkish soap operas invaded the Arab world and were the symbol of romance for many youth. The song was a reaction to this development in our society and a way to say we have our own romance ‘landmarks’ in music, poetry, literature and cinema and more importantly in our daily life and our own language, we just need to look closer to what defines us and try to and try to avoid being a victim to Turkish soap operas.”

About the guest appearance of Kamal Musallam:

“Kamal Musallam is one of the musicians that we really appreciate, his work goes beyond the typical music making into actually modifying and building the instrument itself. He has worked with Ibanez to produce the first oriental guitar, and once that was out we were contacted by producer Mr. Khaled Al Jabasini who invited us to perform ‘Habeetak Bel Turki’ alongside Kamal Musallam at SweetSpot studio in Amman. The song ended up being a unique piece in our repertoire.”

On the upcoming album:

“Our current album is in the works, we take advantage of the long Ramadan nights to work on it in our rehearsal space and things are shaping up quite nicely.”

“This would be our 4th album release, and it’s quite different than the rest of our albums when it comes to the music as well as the themes discussed in the lyrics. As we always focus on the music, and on producing something unique and eclectic, we are trying to merge many styles together and still have that unique Autostrad touch in it.”

And the record’s main themes:

“The themes of this album are quite diverse but do converge at a certain point, after all everything is linked. The current situation in the Middle East is the main influence on our writing process, the Palestinian cause, the everyday life of the Arab/human being and this situation in the world where humans have less and less control over their lives and fates while everything seems to be more of a trend and where tragedy became a usual scene on our TV screens.” 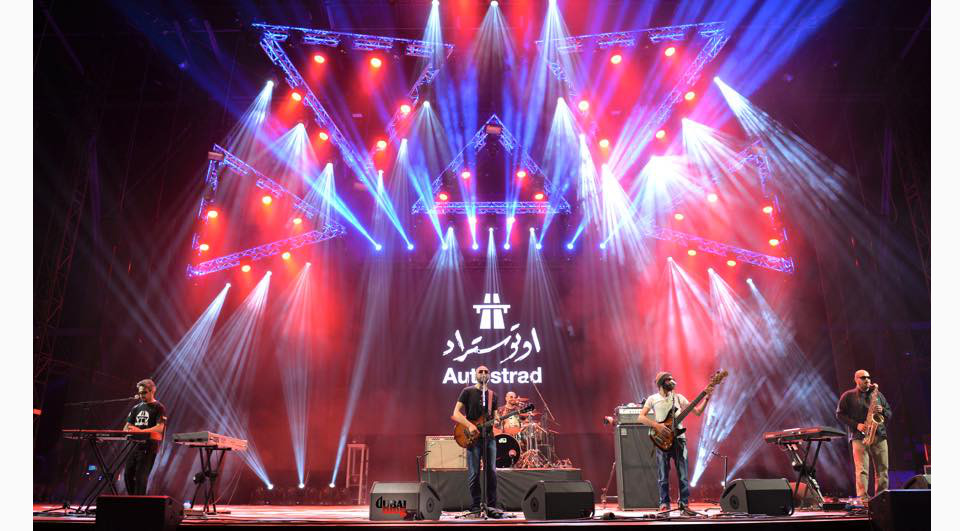 About Autostrad’s origin – and its members’ music tastes:

“We are friends before being a band, we know each other for at least 16 or 17 years, and we have played in other bands together before as well as studied music together which created this real human bond between us and made us who we are today.”

“As stated before, we try not to constrain ourselves with a certain music style and you can notice that in our songs, some have a Reggae beat some have some Funky tunes and others could be classified as Rock. So we do listen to everything, as long as the music is good and inspiring.”

On the music scene in Jordan:

“A lot has happened in Jordan during the last decade music wise. A lot of bands formed, different genres, different ideas, many talented musicians and this is a very good thing for the music scene in Jordan and the Arab world in general.”

“We live in a time where we have been a bit disconnected with our heritage and mass media is throwing all kind of content at everybody’s face for the sake of money making. We think this is the time to create something local, something that Jordanians, Middle Easterners, Arabs can relate to, something that speaks to people the way they are without faking or seeking new identities.”

And about their favourite Jordanian song ever:

“There is one song very dear to us, a folklore song from Aqaba – south the country – that we made a cover of and will be released soon as a single:”