When I first heard Red Blood Cat, the Islamabad-based band had only two songs out. Yet, the way they mesmerized the crowd at their reportedly first actual gig in Lahore in the winter of 2014 proves the power of live music is still alive in Pakistan.

I can’t say much about it since I wasn’t there but I spoke to the band recently to ask them a few questions regarding the secretive façade they put up and to maybe get to know them.

This experimental Jazz-Rock band has existed for years, yet no one really knew about them until last year, and when local music junkies found out about this band, it was as though a new meaning was given to Pakistan’s local music scene.

Why did you guys wait so long to have your first gig/online song release?

Red Blood Cat: We’ve been together for a while, but not very active. Things are now coming together again it seems. “When We’re Older” isn’t our first release online. We made a song called “Summer Shampoo” in the distant past and it may still be lurking around on some derelict page on Soundcloud.

Who all are in the current line-up of Red Blood Cat?

The current line-up is a mystery

What do you guys do all day?

We play cover drives all day.

Hehe.. it is quite self-explanatory, it’s a cricketing shot.

It’s always good to play live. It’s a shame that there aren’t that many gigs happening for independent bands like us. Playing live can give you a sort of instant polaroid picture of how people engage with your music – that’s a charm you don’t get in the studio. 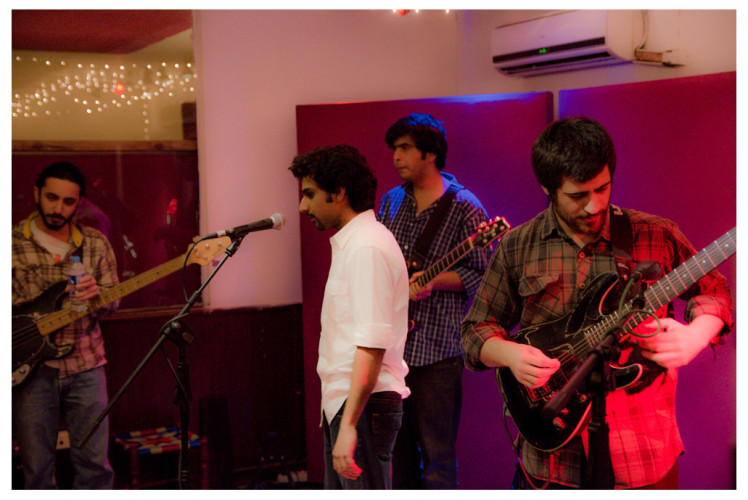 What is the process like for you guys personally when recording music?

With the gear that we have, it is a pain in the ass. The rest of it is honest and natural. It’s good to work with friends you can fuck around with. The process is obviously felt differently by each of us.

What kind of a response were you expecting from listeners, and what kind of response did you get?

We were unsure but the response was very pleasing. Now we are unsure again.

Some of you also play in different bands, why is it that you are okay with being active musicians with those bands but not as Red Blood Cat?

That’s what a musician does. We’re “active” in multiple projects simultaneously – it’s just that some ventures are more commercially viable.

Why no live gigs? Did you guys try organizing your own gigs at some point?

There are very few live gigs for a number of reasons. There’s the obvious security excuse, which really isn’t that legitimate considering the fact that indie bands are far removed from the political scene. Most of the concerts that do happen here are big commercial acts.

Then there’s the lack of venues here.. and the fact that you need a ‘No Objection Certificate’ from the city for even the smallest of gigs in someone’s lawn. Haha.

When is the EP being released? Any upcoming projects you would like the fans to know about?

We’re in the process of writing new music nowadays. The EP should be out before the end of the year and we’re quite looking forward to it but the music in there is not really new in that sense.

What was the strangest experience you guys have had together as a band?

The keyboard went out of tune today. Can you believe that!?