Pakistani singer-songwriter Zoe Viccaji has just released her debut album, “Dareeche”, which took her about two years to complete.

But this Karachi-based artist has been involved in music since her childhood, and playing guitar since the age of 15. Today Zoe tells us about her album, how she quit her day job for music, and about the tricky business of changing languages in music.

But first we asked her about our favourite song off of the album, “Jis Nay Bhi Aana Hai”:

“For as long as I can remember, I’ve always struggled to come to terms with the fact that many things in life are passing, and nothing is permanent. I often find myself questioning the constant up and down, almost wishing things were not so transient and that the seemingly good parts just never ended!”

“Jis Nay Bhi Aana Hai is one of those songs I wrote at a particularly blue time, and it turned out to be a poke at that sadness we feel about the inevitabilities of life, and our propensity for wallowing in the negatives – I realized I was happiest when I let go and grew to accept what came my way. It’s my little urdu ‘Don’t worry, be happy’ song.”

On singing in Urdu and English:

“I first started out as an English singer, and actually composed and wrote all my songs in English. It’s only when I got down to recording my first album and thinking more my local audience that I realized I needed to communicate in the language of my own people. The album “Dareeche” first started out as a 7-English 2-Urdu track album, and finally ended up having just one English song!”

“I would compose my songs in English and then sit with an urdu lyricist to come up with lyrics that reflected the intent and feelings of the song. What I didn’t realize at first was that changing languages in music was a very tricky business. Singing in Urdu requires a different treatment to the melody, the composition, the weighting of words within a tune, and in some ways even an entirely different approach to the voice and style of singing.”

“I’ve been learning as I go along and trying to come up with ways of fusing my original style and the new methods that I’ve been learning through studying eastern classical music. Lately I’ve been composing in gibberish, and that allows me to imagine that I’m singing in Urdu without actually struggling to come up with the Urdu lyrics – it sounds pretty funny to an outsider listening in, but its been working pretty well so far.”

“I can’t wait to get to the point that I can write my Urdu lyrics myself, but I know that will take time. It really is a beautiful language and at the end of the day I’m enjoying the challenge of it all.” 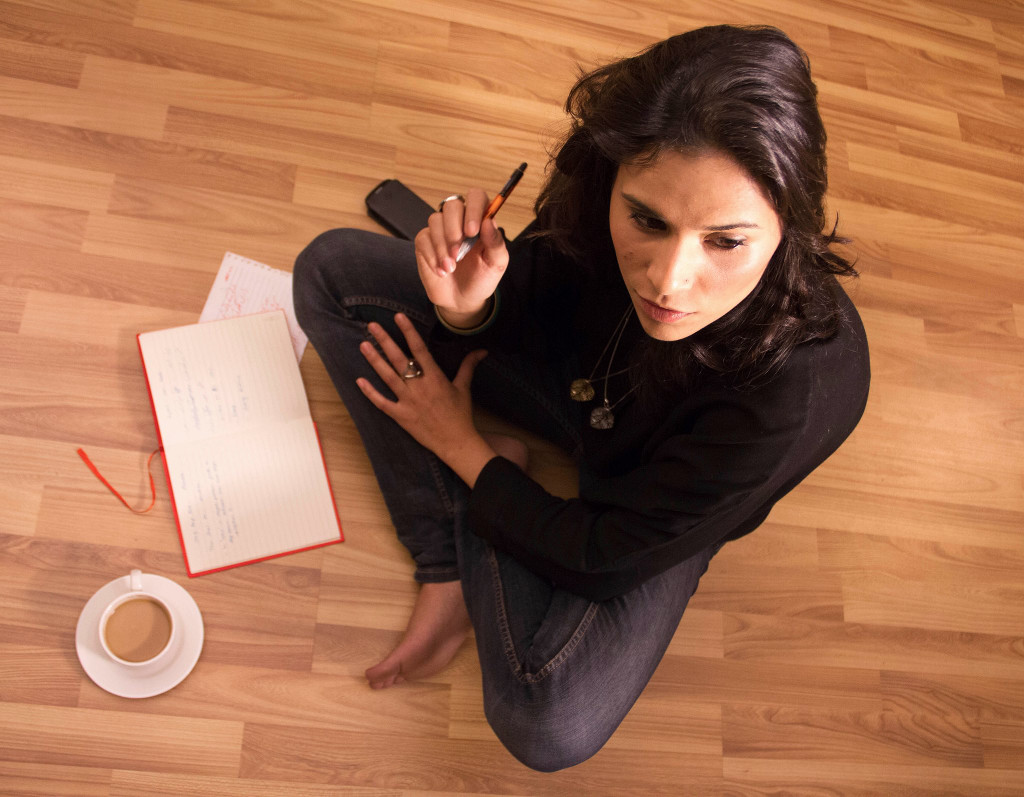 How she got involved with music, and how her interests change over time:

“I just really enjoyed singing and performing from a very young age. I remember my childhood best friend Sana and I would prepare songs and then pretend to perform them to an arena of people – which was mostly just plants and shrubbery in a garden. I loved hearing what I could do with my own vocal chords and would find any opportunity to entertain myself especially in places where I could find a nice natural reverb, like a garage or some random stairwell!”

“Later in my teen years I came across the singer Sarah McLachlan and fell in love with what a melody and voice could do. I remember listening to her album “Mirror Ball” over and over and over again! That’s when I first picked up the guitar and began trying to compose my own music. Naturally the first compositions were very reflective of Sarah’s style, extremely pensive and calm – and I aspired to make songs that were nostalgic and emotionally heavy.”

“With the passage of time, I feel I’ve come a long way from that. I like to retain the depth of meanings but have come to favour a more light-hearted approach. I’ve now started writing much happier and upbeat songs, even if the stuff they’re made of is serious. My musical style seems to generally reflect my state of mind and approach to life at the stage at which I write it. So I’m sure it will keep changing.

About the turning points in your career:

“I think the biggest turning point for me was the year 2011. I was juggling my day job with my musical pursuits post work hours. I couldn’t wait to get done with work so that I could do what I really loved doing – singing. As the months went by it became more and more apparent that I needed to make some big choices.”

“That year saw my first tryst with an urdu cover song “Bichra Yaar” which I sang with the original band Strings. I was also simultaneously recording backing vocals for the third season of Coke Studio, and I also had my first big solo show with the help of a dear musician friend who showed me I could carry a show on my own. “Bichra Yaar” was a hit, Coke studio went on air giving me instant recognition and my solo show was sold out with a long line of people still waiting to get in! That was the tipping point, and I quit my job and went into music full time.”

About acting in musicals – and painting!

“Musical theatre is my first true love when it comes to how I got into music! In fact, much of the music I heard growing up was from broad way musicals like ‘Jesus Christ Super Star’, ‘The Gondoliers’, ‘Cats’, and many others that my mum took a liking to and chose to play on her stereo.”

‘When I was studying at Hamilton College in upstate New York, I was part of the college choir and did several musicals during my time there. And then when I returned to Pakistan, it just so happened that the musical theatre scene was in full throttle in my home town of Karachi. Made for Stage productions was casting for ‘Chicago’ and I got the part of Mama Morton, and then went on to do ‘Mama Mia’ with the same company.”

“My approach to music has definitely been shaped by my exposure to musical theatre. The song “Raat Gaye” from the album was actually written as a musical theatre piece and inspired by the arrangements from ‘Chicago’, the musical. I’ve always dreamed of creating my own show and all the music for it. My mother is also a spectacular writer and has directed many plays, so I hope the dream can materialize one day.”

A question nobody asked her yet, but she’d love to answer:

“I guess there’s always the question of what I’d do if I wasn’t in the Arts or a singer. I’ve always been an animal lover, bringing in strays and taking great joy in bringing them back to health. I’d have definitely become a vet.”

And her favourite Pakistani song ever?

“It think it’s always been “Bichra Yaar” by Strings.”