“I wrote this album to know better what young adult I am, to attempt to exorcise and make this difficult transition from youth to adulthood poetic.”

Now she has agreed to answer our questions about her new, exhilarating project.

Hi Maud, can you tell us about your music experiences yet?

Maud Octallinn: I can’t remember a single moment of my life when I didn’t sing. When I was a child, I entertained myself by memorizing poems and fables, while singing them on weird melodies, full of melismas. I was doing it probably to imitate my grandmother, who prepared masses by playing religious songs on a detuned piano, and my grandfather who whistled invented tunes while gardening.

I have studied classical music for a few years at the music academy but I stopped at 16. I needed to compose with my heart. Sometimes I try to compose instrumental tracks but it’s hard for me not to use words.

On your 2016 tape “Mostlamouratée“, there was a song called “Bétonneuse Bulldozée” (“Bulldozered Cement Mixer”). Your last single is entitled “Super fière sur mon bulldozer”, and you carry a pickaxe on the artwork of “En Terrain Tendre”. Are you fascinated by worksites”?

“Super fière sur mon bulldozer” is the first song I wrote, hoping it will be heared, in 2014. My wish has come true, thanks to music collective La Souterraine. It seems to deal with vengeance but in reality, it’s more about internal revolution, on a personal and artistic degree, and my need at this time to restart from scratch.

The worksite metaphor is really practical. It both deals with big mess and machines which flatten every grounds in order to rebuild stable foundations. I put a lot of self-mockery in everyting I create. Posing as a works foreman on my album artwork is like revealing my ideal alter ego: a superwoman who manages everything like a construction professional.

But in reality, it’s more complicated. I’m rather hypersensitive and I rapidly let myself be submerged by emotions.

Do the toys in the video for “De Ma Cabane” and the drawings for “Super fière sur mon bulldozer” reflect you interest for the childhood world?

Indeed, those video clips are a reflection on our relation to childhood, and they answer to each other. “De La Cabane” shows a girl who wants to get rid of her past, throwing everything that comes from it into the fire. “Super fière sur mon bulldozer” depicts a girl looking for a return to the golden age. The scene when she passes through the wall is ambiguous: we don’t know if she’s dying and then resurrects or if she’s going back to the past, during the golden age.

The two videos show a cyclic and revolutionary conception of time: the girl finds peace by laying herself bare, becoming child et wild again, in order to grow better and find her place in society.

“Mostlamouratée” had failed love stories for central theme. How about this new album?

Now, I say to myself that I wrote this album to know better what young adult I am, to attempt to exorcise and make this difficult transition from youth to adulthood poetic. A burial of my innocence that can be read in the title “En Terrain Tendre”, a pun with “Enterre un tendre” (“Bury a tender [person]”).

The album also aims to shake up listener’s habits, social codes, etc. Like when I stop singing during a concert to speak to the audience, this album often seems to say “listen to me” – a sentence which can be heared in the song “Resucito”. 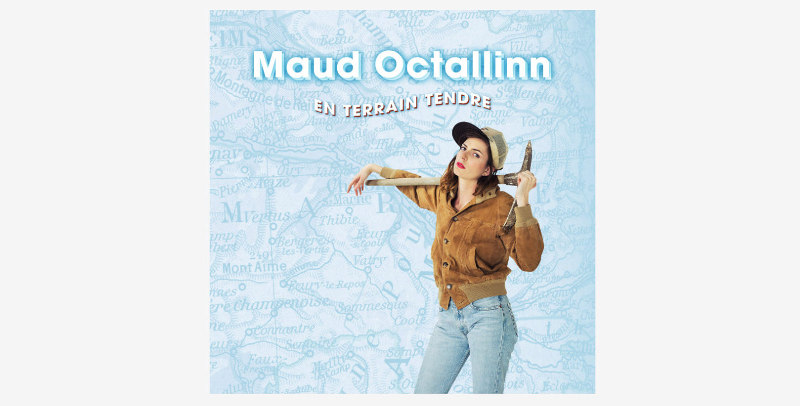 We know La Souterraine’s graphic charter and its pictures of geology maps. Is the album’s artwork and title a common thread between your two universes?

I’ve designed this artwork with the help of a friend, obviously in tribute to La Souterraine, with whom everything begun, but also in allusion to the “Carte de Tendre” of Madame de Scudéry and 17th century-sophisticated women called “Précieuses”, illustrating the different love life phases.

Behind this young girl carrying a pick, we can see the village where I was born, near Troyes, and the region where I grew up, not far from Reims. This piece of map also shows the album’s textual content: “crying”, “virtues”, “filthy”, “Mont Aimé”…

In “Prends-moi” (“Take me”), you adopt a more warlike attitude at the end of the track, on tribal drums. There are still metaphors on ground (“Take my buttocks, these soft mountains”) and emotions (“Take my heart, this bottomless pit”). Are we switching between a “tender ground” and a “wilder” one?

That’s interesting, nobody never asks something about that track, which however announces the next step. Indeed, I’m preparing a concept album, full of metaphoric games between “chair” (“flesh”) and “chair” in a “carnal desire” sense.

“Prends-moi” echoes “Prince FLAT”, a song inspired by a bipolar friend who was living a period of sexual addiction, and is a reflection about my own addictions : rather sex or rather love? Rather everything, I think. Like everyone!

What are your projects for this year?

I’m currently preparing an album recorded with schoolchildren, La Féline and Ricky Hollywood – two artists from La Souterraine – and a documentary directed during the week of recording. In parallel, I’m preparing the concept album we talked about before, the show accompanying it, the release of an EP of duos recorded with Camille Bénâtre during summer 2016 and another documentary on a tour in french region Champagne-Ardenne.

In an ideal world, I would like to tour intensely with this concept album in Canada (I feel very close to their live show culture) and Africa. I feel more and more attracted by music from all the “worlds”. It isn’t unlikely that I may collaborate with a traditional African music band soon. Finally, in the next months, I would like to finish the writing of a feminist auto-fiction.