Without any doubt, we are experiencing a new wave of Peruvian music. New releases just in the last few months have been showing us eclectic and surprising sounds that emerge from the dialogue between local and transnational. Glocal, like the academy likes to say.

One of the most well-crafted sounds in the local scenes right now is the debut EP of the new band called Menores. It’s a phoenix reborn from the ashes of what used to be a rap (with some tropical bass feeling) band Menores de Edad. Two “sisters in life”, Ana Cabrera and Talía Vega, couldn’t stop making music when the last project ended with a great gig in the 7 Mares Festival. So they kept working.

In the Menores de Edad’s early days, they hang together with a great DJ, Orieta Chrem, who was the first Peruvian woman to be invited to the RBMA in Rome, almost ten years ago. Orieta went to live in Europe, where she studied sound engineering and founded a label called Basal, first based in Barcelona and then Berlin.

When she got back to Perú to build her studio on a 15th floor (called Qmulus Sound), she also started developing the new sound of Menores. Composing process was well documented by the Peruvian-New York video blog Bitrosie.

“Tierra de Nadie”, as Menores’ new EP is titled, brings us 5 powerful tracks with a footwork base, and a really good definition of bass. The lyrics of the three female singers and composers create an intimate and dark atmosphere. We are inside the mind of three women, who are revealing their feelings about life in a poetic way. How often can you experience such things?

Each one of these tracks bring us a different sound, texture and meaning. It’s not exactly electronic music, but it’s far from street rap. And even gets on higher conceptual altitudes when they add harmonies to the singing. It’s like their musical tools are being used to reveal the souls of these girls.

But they achieve that “with a little help from their friends”. So we have an epic violin played by the amazing Pauchi Sasaki in “Serpiente Blanca”, a citar of Jesper Frederiksen in “Niñas Perdidas”, a bass played by Paulo Sapian in “Humo Negro”. And the song “Tierra de Nadie” has percussions by Agni and a drum set played by Antonio Olivera.

Maybe that’s why their live show is one of the most ambitious you can find in the Peruvian scene. Even without all those musicians on stage, Menores show us they are not messing arround. 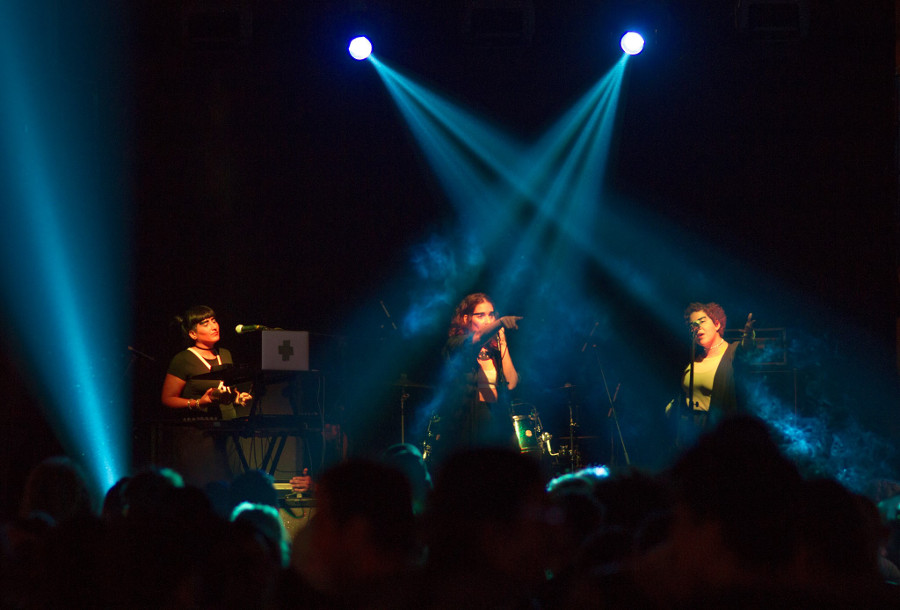 They’ve released this album with a double showcase with local tropical bass heroes Dengue Dengue Dengue, one in the Red Bull Rooftop, and the other in Noise Club, in Barranco. In that last performance they took the stage with a VJ, a small light set up and two dancers. Something very unusual for a proudly independent project.

They are also in a not so unusual situation of being an entity that doesn’t belong to any specific scene. But they are taking the local press like a storm, and the growing number of stages that have already received them.

“Tierra de Nadie” EP was released in a particular way… Since people don’t buy CDs anymore, and buy expensive vinyls for the physical experience, what if we give something special to people? So for now, this EP is only available in digital platforms and in a special package – a piece of art with the cover created by Muriel Holguín, which includes a download code for the high resolution audio.

A while ago, this new material was distributed at MIDEM in Cannes, so maybe we will hear some good news for these great girls in the next months.