One of Japan’s most imaginative singer-songwriters YeYe has recently returned with a colourful video, “Ate a Lemon”, and tomorrow releases her third album, “Hito” (“Human”). In our interview, she talks about the joy of playing in a band and her dream festival line-up.

Like Ecuador’s Maria Usbeck, her labelmate at Rallye Label, Kyoto-based YeYe makes eclectic pop music. In quite the same way as Prince or Sufjan Stevens: she can play almost all instruments by herself. But she was invited several friends and musicians – on keys, bass, drums and horns – to record her third album, “Hito”, or “Human”. They played all the instruments at the same time, and often used the first take or the second one. For vocals, it was mostly the first take.

“It is easy to make a high quality recording nowadays. But I have been thinking that it is not always the best way to arrange all things well,” YeYe wrote on her blog. “Attractive music is, if anything, dangerous and makes your heart beating. I’m not good in hiding my emotions. So I better give listeners all my emotions as they are, and that’s my way. This is one of the reason why I named my new album ‘Hito'”.

You said that “Parade” was inspired by your 3-year-old niece who danced watching Perfume or kyarypamyupamyu. What was your inspiration behind “Ate a Lemon”?

YeYe: Actually it wasn’t my idea this time, the director made them all. The video was awesome and very artistic, we couldn’t picture it until it was done. There was only one request from me in this video, I wanted to shoot it with my supporting members, Jun Hamada, Senoo Ricky, Seido Tanaka.

I reckon “YeYe” used to seem as a singer-songwriter at the beginning. However, I’ve been doing YeYe as a project which contains several styles like solo, band, and so on since I started music. Especially YeYe band takes a very important part in my project. And the new album has been composed by YeYe band. So we should be in the video together. I’ve been thinking to strike out with other project, too.

At first, you were singing in Japanese. Why did you decide to sing in English? Do you think the language also influences music itself?

I didn’t really think about it. It’s just made in English or Japanese, very simple reason. I used to write songs in English first, and every time try to change them into Japanese in the past. However, it was so hard and impossible with all songs. So I realized that I’d better create music the way I want to. I think some of my melodies and rhythms are influenced by Feist or Belle & Sebastian in my new album.

Initially, you were also playing all instruments by yourself. Why did you start to play with a band?

My first album was all self-playing and self-producing. But the three members of YeYe band – all of them very respected musicians – made me realize it is so much fun and amazing thing to play with people, not alone.

I’ve been learning lots of things from them every time we played together. I might play and produce by myself again one day in the future, but I really feel comfortable playing with them for now. 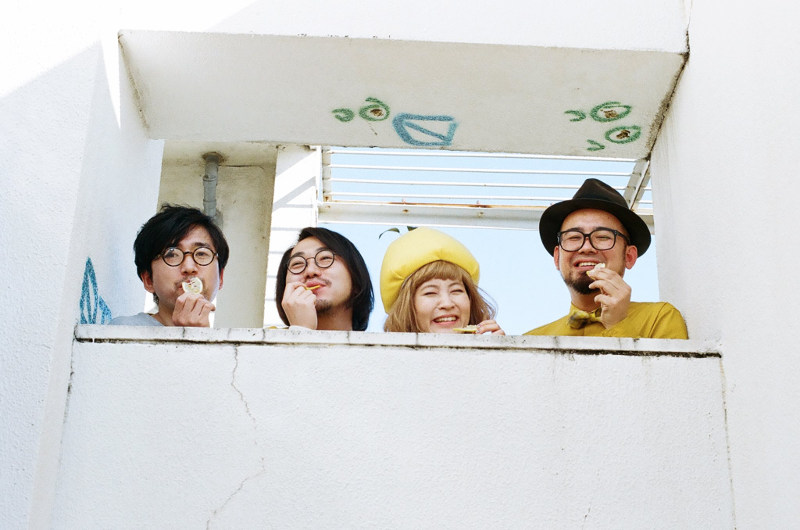 Do you plan any concerts outside Japan someday?

I’ve been always wishing having concerts outside Japan. I really think we’ve been living in a very lucky era now, because we can go overseas easily compared to the past.

The other day, you tweeted about your dream festival line up: YeYe, Little Dragon, Feist, Karen O, Kuki Kodan, Belle & Sebastian, Gentouki, advantage Lucy, Carnation, Erlend Oye, Dirty Projectors. It looks fantastic! But why did you choose these particular artists?

The artists I picked up – all of them are “my” music. These artists have been affecting me since I started playing music. I used to listen to them when I was a teenager, and so on. I’d love to collaborate with them if it could be possible.

I’ve got a dream, regardless of this festival, to have an album produced by Belle & Sebastian, to play in a duo with Erlend Oye, something like that…

How in your opinion Japanese scene is different from US/UK scene?

I’m really longing to overseas because of their established scenes, the rich background of their music culture. On the other hand, I think Japanese comedy seems to be like that. We have an established culture of “comedy”. It might take a comedian some time, he might even get old, but eventually he’ll have the respect of the audience. I wish Japanese music culture grows up like this.

And a personal question: Why are you a musician?

I have no idea about it. However, I guess I’m a musician because I feel comfortable when I sing.