… tells us a “DIY folk singer-songwriter” Georges Goerens, who just released his debut solo EP under the nickname Bartleby Delicate.

Bartleby Delicate is the brand new solo-project of the young and talented singer-songwriter Georges Goerens, better known as the band leader of the indie rock band Seed to Tree. His first EP “Whatever We Find Suitable To Compare” is out since April 23th, followed by a two-month German tour with some other gigs in Luxembourg and Belgium.

The release party in Luxembourg, celebrated on May 9th, halfway through this great journey, was an incredible experience between friends, family, strangers, groupies, music lovers and lucky wanderers, all driven by the same energy, captivated by Bartleby Delicate’s mesmerizing melancholic voice.

I love to see Georges on stage, each time I am more surprised by the intensity of the emotions produced. But this time I didn’t know what to expect, Georges without the guys on his side… Well, let me tell you I loved it! And even if the place was crowded, the experience was as intimate as a concert in your living room.

It’s always nice to hear him but watching him surrounded by all this crazy machines and instruments was magical. His folk was sometimes flirting with electro sounds, even teased by some stoner tones. I was blown away!

His first videoclip “A Little Less Home” talks about human connexions and sensitivity, which is better explained in the short interview below I had with Georges.

Because I wanted to know – and let you know – more about this project, I asked Georges few questions. He’s on his way back from a tour with Seed to Tree, he kindly accepted to answer.

Dear beehype’s readers, music lovers hungry for discovering talents from everywhere, let me take you for a brief journey to the Grand-Duchy and introduce you to this unique beautiful human being using not-unique topics for a very unique project.

Justine Guimard: After all these years alongside Seed to Tree, how and when did you realise it was the time for you to launch your solo project?

Georges Goerens: Basically, this point of realisation never came. Bartleby Delicate was not a conscious choice and I don’t feel like the founder of this project. I would rather say that Bartleby Delicate was already there the whole time, growing and at some point it just happened that I found myself on stage with the new songs that I’ve been writing next to Seed to Tree over the years. There was no plan or reflection, rather an intuition that revealed itself.

Aren’t you afraid to have to make a choice between these two projects?

I can see that it’s a lot of work but I can also feel that the music is giving me a lot of satisfaction and this is giving me strength. As long as there’s the will to do both, I will go on doing both. In the end, if it comes to success, I don’t think that it’s my decision anyway.

You also write the songs for Seed to Tree, how do you work? Do you first write the song and then decide for which project it will be or do you know before writing?

Sometimes I suggest songs in the rehearsal, we play them but they don’t turn out to become Seed to Tree songs. Some of them, I try to use them again for Bartleby Delicate. But it’s more common, that I can already tell by playing the basics of a song, if it’s rather growing into a Seed to Tree or a Bartleby Delicate vibe.

For me, both projects have a lot of similarities but also individual identities that differ from each other. Bartleby Delicate songs need a strong narrative; Seed to Tree needs a strong hook or a vibe that inspires the others in the band. 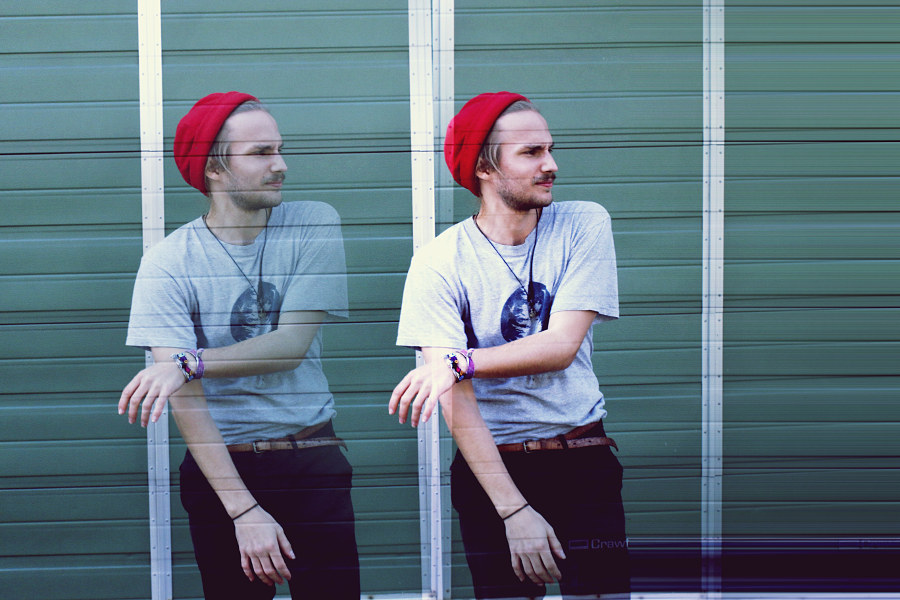 How would you define yourself and what makes you a unique singer-songwriter?

If I would put a label on the music, I would say that it’s DIY singer-songwriter folk. The folk influence is obvious and the DIY is important to me because I identify with the Lo-Fi and DIY music scene. I’d say that the music from songwriters like Daniel Johnston inspired me the most over the past year.

I wouldn’t consider what I do to be unique, the harmonies and topics exist already. But I’d say that I’m trying to give a subjective perspective on what I see and I’m trying to find my own way to express this: through poetry, through music, trough tonality, and eventually trough atonality.

In the end, we are all unique, always, and it’s just silly to look for it. I don’t think that being unique is necessarily a good criteria for art.

You referred to your video clip “A Little Less Home” as a “sensitive Bartleby bromance”, can you tell me more about it?

The context is important here. This was a reaction to a homophobic comment under one of my videos, commenting the video was “gay”. I reacted that this was homophobic and referred to the relation of the two men in the video, one of them was myself, as “sensitive Bartleby bromance”. I wouldn’t use this term again though. It does not matter in the video if this relation is a sexual or platonic one. What really matters is the interaction between human being who show deep trust in each other.

This creates the feeling of being home. This human connection can happen anywhere with anyone, as long as we try to create an atmosphere of awareness and respect, no matter what gender, sexual orientation or nationality. But it’s not so easy to get there. This is not an utopia but we need political implications, a better protection of minorities and more anti-discrimination policies. The song is more about sensitivity than about bromance.

Do you have a motto?

No, it’s constantly changing with my mood.

Stream “Whatever We Find…” EP on Soundcloud and Spotify.