Halleluwah is a duo from Reykjavik consisting of producer Sölvi Blöndal and singer Rakel Mjöll.

They’ve just release their first self-titled debut album in Iceland – soon to be released internationally – heralded by the stunning single “Dior”. We asked Rakel about the band, the song, and the album.

You first single “Dior” went viral immediately after its release. How do you explain it?

Rakel Mjöll: We didn’t have any PR backing the single, just put it up on Soundcloud. But it seemed to gather a lot of attention, which was wonderful that it got such an interest. It’s a whole world of sound mixed with nostalgic vocals. So it’s a clash between something new but familiar. Maybe that’s what draws people to it, that clash. Like love. It’s new but familiar.

How did you actually become a band?

Originally we weren’t planning on being a band. Sölvi called me out of the blue and wanted me to come into his studio to try out a song he had been working on. Even though Iceland is small, and Reykjavik even smaller, I had never really met him. But we ended up really getting along that day musically and personally, and what came out of it was a song we made together. That song gained radio success in Iceland so we decided, ‘let’s start a band and make an album’.

It’s from one of Sölvi’s favorite song by the psychedelic band CAN called “Halleluwah“. It sums up our music too, coming from different angles of genres, from hip hop to yé-yé singers influences.

Did you work on the debut LP together in the studio?

I study visual art in Brighton and I’m about to graduate this summer, and Sölvi lives in Reykjavik. So it’s been tricky. But luckily England and Iceland are two islands close to each other. I’ve been flying home to play shows, write and record almost every month now for the past year.

It works out nicely because we’ve built our backgrounds apart and when we come together to work on a song it gets finished in a day. One of my favorite songs on the album is one that came together in an hour right before I had get to the airport. When you’re not tied down to decrypting every word or melody but just let it live in the moment it makes it more authentic and interesting.

The songs for the album were made in a period of a year, and the beautiful thing about that is that life happens during that time. You change as a person, both strength and weaknesses arise at certain moments and to be able to capture that time in a song is for me, what makes me so excited about music.

Also we got to know each other musically during that time period and gain a trust, and that shows in the music. It turned out far better that I could have imagined, and i’m so glad it exist now as a physical copy. 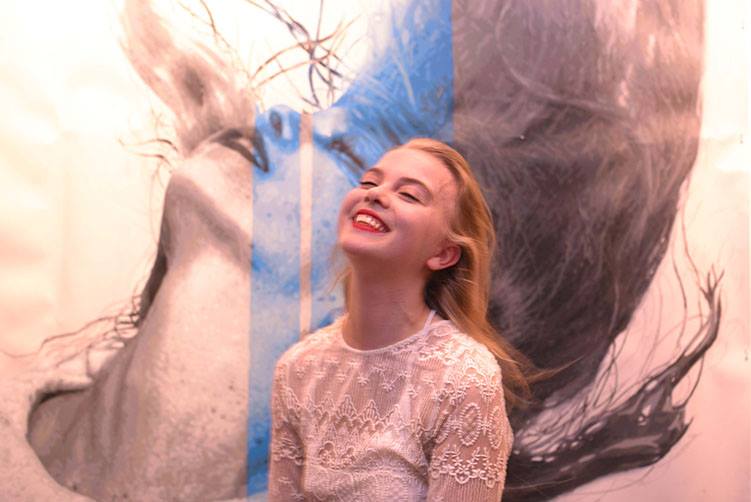 Who is Karen Ösp, the author of your album cover? Did you collaborate or let her do whatever she wanted to?

We met at a group art show we put on together last summer and we were both intrigued with each others work. When ideas for the cover art came up I contacted her and went to visit her at her studio. She just graduated from a art university in the States and moved back to Iceland.

I came to her with ideas for the cover and she took them to a whole new level. The way she paints is incredible, and she can’t produce a small painting… They all have to be the size of garage door. In the end she produced three huge paintings of myself stuck in motion that we premiered at our release party in Reykjavik earlier this month. The three paintings we’ve used for the cover art.

Now after your debut is officially out in Iceland, what are your plans – and dreams?

First we wanted to release “Dior”, and then have a physical release in Iceland through our label there. Since “Dior” took off so unexpectedly we’ve been talking to a lot of good people outside of the island to release it globally. We’re just excited to see what’s next. I’m graduating (jibbi!) so we’re building our live show to take it abroad.

And if we asked you about your very favourite Icelandic song?

As my first thought… my favorite current Icelandic album is by Teitur Magnússon that just came out, and the song would be “Vinur vina minna”. It means “A friend of my friend” which is very Icelandic. It’s like it’s written in the 60’s… made in the 70’s… but the lyrics are so 2015 that it gets confusing and beautiful at the same time.